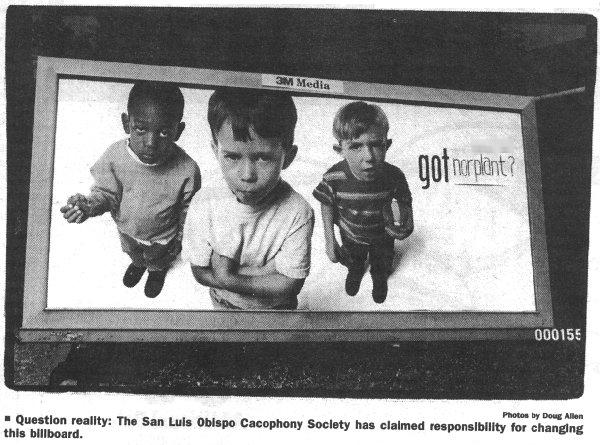 Located in the frequently-described-as-tranquil California community of San Luis Obispo, home to Dr. Ruth Drown and L. Ron Hubbard, the S.L.O. Cacophony Society has been for some time embarked on a campaign of subverting the mundane and playing the knee-jerk reactions of the populace like a pipe organ.

Our History: In 1983, a young Scott Hudson entered a student ghetto apartment near Cal Poly State University, hoping to be rewarded for his story-telling efforts by a bong load of cheap Mexican schwag.

Meanwhile, in the sewer tunnels below the city, the spectral projection of a sinister New Jersey native was concocting what would become an unsuccessful experiment in orgone accumulation. Unable to control his misbegotten creation, the black-hatted sorcerer of powers we don’t even want to understand was propelled back to his native land as his "machine" sent a blast of pure orgonic plasma toward the aforementioned student ghetto apartment.

(Actually, the blast was originally targeted elsewhere, by amazing coincidence rebounding off of the pelt of Church the Undead Cat who was at the time on his eighth undeath, before continuing on to the aforementioned et cetera.)

The schwag that was impregnated with these invisible orgonic pulses became transformed into concentrated ur-frop, the smokage of which transformed young Scott Hudson into The Reverend Won-Ton Sur, of whom no more may safely be said. Hudson, in collaboration with the mysterious and perverse Ishmael Gradsdovic, founded the S.L.O. Cacophony Society.

The aforementioned et cetera where this miracle occurred is now known as "The m00n" and is where the most holy rituals of the S.L.O.C.S. are held to this day, some seven million minutes since.

Links to other chapters: